Sgt. Pepper's Lonely Hearts Club Band (often shortened as Sgt. Pepper) is the eighth studio album by the English rock band The Beatles, released on 1 June 1967 on the Parlophone label and produced by George Martin. The album is widely regarded as one of the greatest of all time, and has since been recognized as one of the most important albums in the history of popular music. The album cover art, by English pop artist Peter Blake, depicts the band posing in front of a collage of their favorite celebrities, and has been widely acclaimed and imitated. In fact, the Sgt. Pepper album cover, which features over 70 famous people, won the Grammy Award for Best Album Cover in 1968.

The album packaging was art-directed by Robert Fraser, designed by Peter Blake and Jann Haworth, his wife and artistic partner, and photographed by Michael Cooper at Chelsea Manor Photographic Studios on March 30, 1967. It features a colorful collage of life-sized cardboard models of famous people, including The Beatles themselves, in the guise of the Sgt. Pepper band, dressed in custom-made military-style outfits made of satin dyed in day-glo colors. The suits were designed by Manuel Cuevas. In the center of the album cover, The Beatles stand behind a drum on which are painted the album's title. The drum was painted by fairground artist Joe Ephgrave. Peter Blake and Jann Haworth combed through hundreds of photos for months before the photo shoot. Many of the people depicted were personal heroes or icons of the Beatles.[1] 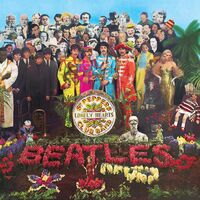 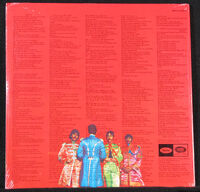 In South East Asia/Malaysia/Hong Kong the album was censored - three songs that could be interpreted as being "drug related" (such as Lucy in the Sky with Diamonds as a reference to LSD) were removed. Due to this, the album cover was censored accordingly, removing the lyrics of those specific songs from the back of the album.[1]

In Korea a version was released in 1977 that removed all famous people completely (as can be seen in the image to the right).

The celebrities and items featured on the front cover are (by row, left to right):

Other objects within the group include

People who were originally intended for the front cover but were ultimately excluded:


Cite error: <ref> tags exist, but no <references/> tag was found
Retrieved from "https://albumcovers.fandom.com/wiki/Sgt._Pepper%27s_Lonely_Hearts_Club_Band?oldid=4645"
Community content is available under CC-BY-SA unless otherwise noted.