Nine Lives is the 12th studio album by American rock band Aerosmith, released on March 18, 1997. The album was produced by Aerosmith and Kevin Shirley, and was the band's first studio album released by Columbia Records since 1982's Rock in a Hard Place. It peaked at #1 at the Billboard Charts. One of the album's singles, "Pink", won a Grammy for Best Rock Performance By A Duo Or Group With Vocal.

The album artwork was designed by acclaimed Austrian graphic designer Stefan Sagmeister. The booklet within the jewel case contains 12 pieces of album art (including the cover). Each picture contains a smaller version of the previous picture within itself. As the final picture is included in the first, an infinite loop is created.

The original album cover angered some Hindus, who felt the artwork was offensive. The image depicts the Hindu deity Lord Krishna, with his head replaced by that of a cat, dancing on the head of the snake demon, Kāliyā. This is a popular image in Hinduism (a religion that is arguably more integrated with visual art than any other), and one of Sagmeister's favorites from his childhood. However, many Hindus were offended by the cat head alteration. Aerosmith had been unaware of the source of the artwork, and the record company apologized, changing the artwork to a revised version which can be seen below. 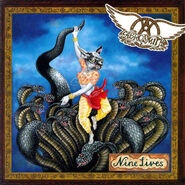 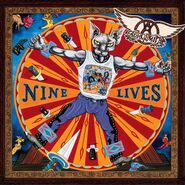 Examples of the Hindu Imagery that Inspired the Cover

Retrieved from "https://albumcovers.fandom.com/wiki/Nine_Lives?oldid=4172"
Community content is available under CC-BY-SA unless otherwise noted.