Bridges to Babylon is a studio album by British rock band The Rolling Stones, released by Virgin Records on September 29 1997. It was their last studio album of the 1990s and was released to mixed reviews. It contained an unprecedented three solo vocals by Richards and reached #6 in the UK, #2 in France and #3 in the US, where it was certified Platinum. As of January 2010, Bridges to Babylon has sold 1.1 million copies in the US. The accompanying Bridges to Babylon Tour in 1997 consisted of 108 shows worldwide, making it the second largest grossing North American tour of all time.

The Bridges to Babylon cover features an Assyrian lion embedded into a special manufactured filigree slipcase. The interior reveals a long strip of desert to match the accompanying tour/stage design. 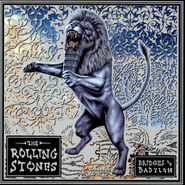 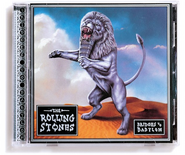 Retrieved from "https://albumcovers.fandom.com/wiki/Bridges_to_Babylon?oldid=4168"
Community content is available under CC-BY-SA unless otherwise noted.